skip to main | skip to sidebar

Feeling sad and freaked out

Pulitzer Prize-winning journalist David Halberstam, 73, killed in a car crash in California was being driven by a UC Berkeley journalism graduate student, Kevin Jones. He suffered a punctured lung. Halberstam, who had come to Berkeley to deliver a speech to journalism students, wanted a volunteer to drive him to interview a former star footballer in Mountain View, in return for an opportunity to spend time with the famous journalist.

The journalism school had e-mailed Halberstam’s offer to its students, saying “he’ll give you a private seminar on the way back. Details are vague, but this could be a really cool opportunity”. Kevin took up the opportunity as “he wanted to talk to someone that he thought was interesting”. Besides, Kevin didn’t have classes on Monday.

The crash that left his journalistic icon dead made Kevin feel ‘really sad and freaked out’, said his wife from the Stanford Hospital, where he was admitted with lung injury, “It’s just a very traumatizing thing to have gone through”.
Posted by GVK at Wednesday, April 25, 2007 No comments: Links to this post

When Rs.12 was a princely salary 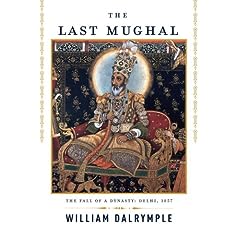 Descendants of the Mughal emperors, in early 1800s, were paid their upkeep by a magnanimous British East India Company. A Mughal prince got a monthy allowance of Rs.12 a month, which wasn’t more than the wages a head servant in any sahib’s household those days. William Dalrymple’s ‘The Last Mughal’ gives a fascinating account of the life and times during the Raj.

Delhi College, a madarsa under the Mughals, was remodeled by the Company in 1828 “to uplift the uneducated and half-barbarous people of India”. The man behind this good work was Charles Trevelyan, brother-in-law of Thomas Babingdon Macaulay, whose minute declared that “a single shelf of a good European library was worth the whole native literature of India and Arabia”… The historical information which has been collected from all the books written in the Sanscrit language is less valuable than what may be found in the most paltry abridgments used at preparatory schools in England . . . The languages of Western Europe civilized Russia. I cannot doubt that they will do for the Hindoo what they have done for the Tartar.

In striking contrast to his three notably dressy younger brothers, Mirzas Jahangir, Salim and Babur, Bahadur Shah Zafar (1775-1838) was a man of spare figure and stature, plainly apparelled, almost approaching to meanness, reported Major Archer in 1828, when Zafar was fifty-three, and still a decade away from succeeding to the throne. “His appearance was that of an indigent munshi, or teacher of languages.”
When one of his followers was bitten by a snake, Zafar attempted to cure him by sending “a Seal of Bezoar [a stone antidote to poison] and some water on which he had breathed,” and giving it to the man to drink.. .The Emperor also had a great belief in charms, or ta’wiz, especially as a palliative for his perennial complaint of piles, or to ward off evil spells.
To read more of the excerpt access California Literary Review.
Posted by GVK at Tuesday, April 24, 2007 1 comment: Links to this post

Are women in media over-empowered ?

I know this is a loaded question, prompted by a statement in S R Madhu's talk to the Joint Action Council for Women that met in Chennai last month. He believes there is a strong connection between women's media and their empowerment. Full text of his engaging talk appears in a blog by Madhu's young journalist friend Alaphia Zoyab. Bloggers like Ms Zoyab, to my mind, can work at securing equal empowerment of non-media women.

Their target group ought to be middle-class urban career women, who, seen as liberated in economic terms may not be so empowered in their domestic situation. Empowerment of rural women may well take a generation or two to be realised. Media women are a class apart.

They are perhaps the most empowered of the lot. So much, in fact, that if the likes of Ms Kakaria have their way, women's empowerment in the media may well become a threat to many men hoping to get into the media. Mr Madhu in his talk on 'Women and the Media' gives profiles-in-brief of the empowered such as Anita Pratap (ex-CNN), Madhu Kishwar (editor, Manushi), Barkha Dutt (needs no intro), Mrinal Pande (editor, Hindustan), Sucheta Dalal (finance columnist, and more), and Bachi Kakaria (Times of India)

As Sunday Times of India feature writer, Ms Kakaria used to send me memos (then, a TOI outstation correspondent) asking for 300-word input for articles she was working on. She was in an empowered position of aggregating, editing, clubbing-with, and, at times, ignoring, inputs received from various correspondents. The resultant feature articles got a full-page play with Bachi's byline. Of course, they acknowledged our input, at the bottom of the story, in italics; almost as an after-thought. I suspect such inputs-driven Sunday features were invented by editors to promote their blue-eyed ones in the organization; and to hassle outstation reporters such as yours truly.

I am not blaming Ms Kakaria, merely making a point about how empowered women can get. Mr Madhu's talk cites Ms Kakaria as saying, "the women we interview for jobs are so much better than men, that sometimes we take a man just as a token gesture for men". Her message for women in the media: Stop thinking gender; think only professional.

They have evidently come a long, log way, women in media. There was a time when newspaper editors would not think of having a woman on their staff. Speaking of the status of women on the media scene in the 60s Madhu cites the case of Rami Chhabra, who, seeking a job on The Statesman, Calcutta, was told by editor Prem Bhatia, "Young lady, if you want to work in a daily, wipe off that lipstick and remove those ear-rings. Pretty girls shouldn't be in newspaper offices. They distract the men."

Pran Chopra reportedly turned down Razia Ismail for a job saying, "I'm sure you would refuse to do night shifts". This was a legitimate concern of editors those days. In the initial days when a few women got into newspapers, usually because of high connections (being daughters of high government officials or editors in other newspapers) editors didn't give women the night shift. Which caused resentment among men, because their turn for late-night week came quicker on the duty roster. Unable to take flak from male peers, some women in newspapers, feeling uncomfortable with favoured treatment, have in fact insisted on they being given night shifts, just as their male colleagues. Razia, I knew, joined Indian Express, New Delhi.

Madhu's address on women in our media refers to Barkha Dutt, a hotshot TV reporter from 24x7. I can't help feeling that her go-getter reputation has something to do with her genes. Barkha's mother was a reporter with Hindustan Times, New Delhi. Those familiar with Prabha Behl (before her marriage with S P Dutt) knew her to be combative in chasing stories, fairly vocal at press conferences, and friendly with other reporters. She had a wavelength with those of us in other papers; and usually addressed us, male or female, as 'yaar'. Prabha rose to be the chief reporter, Hindustan Times. She died young

This piece also appears in Desicritic
Posted by GVK at Sunday, April 15, 2007 2 comments: Links to this post

Gaping holes on water tank; who pays for the damage ?

It is all very well for Karnataka Chief Minister H D Krishnaswamy to talk tough to non-performing officers, warning them of stern action. Our media works into the story well-worn clichés - 'taking officials to task', not tolerating 'lackadaisical attitude', and action against officials who don't 'pull up their socks'- to make CM appear a no-nonsense guy.

The media knows, as well as anyone else, that politicians play to the gallery. And Mr Krishnaswamy, or anyone else in his position, ought to know that government officials are relatively immune to such threats. Their service rules and self-serving official procedure ensure government employees are insulated from ruling party threats that are, at times, held out by political leaders for public consumption.

If anything, the political executive has limited powers in comparison to the bureaucracy and the police. As they say, a chief minister does not even enjoy the powers that a police inspector does. A chief minister can't order anyone's arrest; something a police officer does in as a routine.

The snag is, in any government, there are a few officials willing to do the biddings of political bosses. A minister, ruling party district secretary or MLA often gets done things that are not within their ambit of power, with the help of obliging officials. Immediate provocation for Indira Gandhi to declare Emergency in 1975 was Jai Prakash Narayan's call to the police force not to obey illegal orders of those in power; and to insist on getting all their orders in writing from their higher-ups.

On the flipside is the apparent inability of CM and other ministers to hold officials accountable for their lapses. Take the case of contaminated central water storage tank that supplies drinking water to Mysore city. The storage tank has been in a state of neglect for the last six years, according to media reports. The water storage tank would have continued to remain uncared for, if it were not for a civic initiative that exposed this monumental neglect by officials.

According to Mr A Ramdas, a former MLA who led the civic initiative, concrete roofing of this massive underground tank has gaping holes, exposing the stored water to contamination through fallen debris, floating remains of dead birds and an outgrowth of weeds.

The city corporation commissioner, who has moved in the wake of media exposure, to do damage control and clean up the tank, ought to explain how such blatant lapse by the maintenance staff had gone unnoticed for so many years. Would the tough-talking CM or the minister concerned take steps to identify officials responsible for having neglected the upkeep of the water storage tank for so long?

Departmental action apart, a CM concerned about streamlining the administration ought to address the issue of material damge. Is there a provision (or shouldn't there be?) in the service rules of government officials for fixing individual liability for the material damage caused to the water storage tank? Shouldn't such damage be quantified and the computed amount collected from non-performing officials concerned ?
Posted by GVK at Saturday, April 07, 2007 No comments: Links to this post

My write-ups,initially published in zine5.com, Desicritics and elsewhere have been contexted,updated, or otherwise monkeyed with to make them seem relevant - G V Krishnan.